Thiruvadirai Kali, a traditional dish made with rice & dal, during the festival of thiruvadira. A festival celebrated in glory of Lord Shiva in the southern state of Tamilnadu and Kerala.

Thiruvadirai is the star of Lord shiva. Margazhi Thiruvadirai, a fesival celebrated on the full moon day, also called as Aarudra Darisanam.  The festival celebrates the cosmic dance of Lord Shiva.

The traditional offering made on this day is called Thiruvathira kali and 7-kari kootu. The Thiruvathira kali , made with rice and moong dal, is sweetened with jaggery . The kali is then served with a stew made of 7 different vegetables, 7-kari kootu. One of the festivals where we offer a sweet paired with savory side, signifying life is a balance of all tastes.

If you are looking for a kali recipe with millets, an alternate grain to rice, check this Kuthiravali kali recipe, made with barnyard millet and moong dal.

How to make Kali

Start by dry roasting rice and moong dal and pulsling it to a coarse mix. This mix of rice and dal, then cooked in jaggery water until soft. Add cardamom powder and finish it with a generous addtion of roasted cashewnuts. 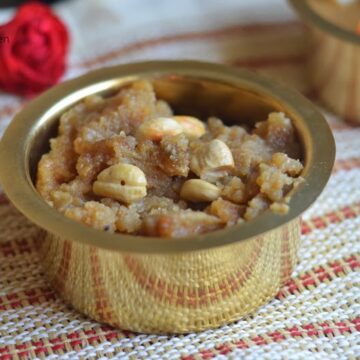 Thiruvadirai Kali | How to make kali in cooker

Serve this traditional thiruvadirai kali warm, with 7-kari kootu, a tangy stew made of mixed vegatables and beans. Enjoy the flavors of sweet and savory in your palate.

An old recipe from 2013, updated with new content for better engagement.