Kuthiravaali kali, a sweet made of barnyard millet and moong dal, on the auspicious occassion of Thiruvathira Festival.

Thiruvathria, a shaivite festival celebrated on the full moon day in the month of margazhi(December-January). A festival, celebrated in Tamilnadu and Kerala with great significance. Aarudra/Thiruvadirai is the star of Lord shiva and Margazhi Thriuvadirai is celebrated as Aarudra Darisanam.  Arudra Darshan celebrates this ecstatic cosmic dance of Lord Shiva.

The traditional offering made on this day is Thiruvathira kali and 7-kari kootu. The Thiruvathira kali , made with rice and moong dal, sweetened with jaggery and served with a stew made of 7 different vegetables. One might wonder how a sweet is paired with a savory dish. Most of the traditional food prepared for festivals signifies the balance in life, sweet and savory are part of our lives, one should know to accept them for a balanced life.

What is Barnyard Millet

A tiny, round, white grain that grows in the hilly areas. Millets are great replacement for rice. And particularly barnyard millet and kodo millet taste very close and similar to broken rice. Food made with millets is considered to be low in calories, has a low GI and a great source of iron and dietary fibre.

I personally prefers millets to rice as due to my health reasons. Almost all the rice-based dishes can be made with millets . You can see a wide variety of recipes in my page using millets here.

How to make Kali

To make this sweet mash, dry roast the millet in moong dal in a skillet. Add equal amoutns of milk and water and cook it soft. If you are vegan, avoid milk and cook it entirely with water.

While the millets is cooking, melt jaggery in water, strain for purities and keep aside until use. When the millets are soft, add strained jaggery water, add coconut and cardamom powder and cook until all the liquid is absorbed. Add some roasted cashewnuts to this and take it off heat. Serve the delicious kali with 7-kari kootu. 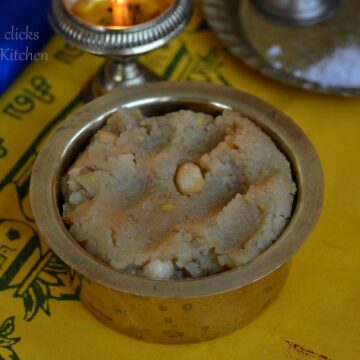 Serve this delicious kuthiravali kali with savory 7-kari kootu. Enjoy the combination of sweet and savory.