Srivilliputtur/Srivlliputhur is one of the popular 108 Divya Desam(Lord Vishnu’s abodes) and also the birthplace of two of the most important alvars in the Vaishnavite Tradition, Periyazhvar and Andal/Kothai Nachiyaar/Sudithantha sudarkodi.
The history of Srivilliputhur revolves around the Temple, dedicated to Andal, the only female Alvar of the 12 Alvar saints of South India. She is credited with the Tamil works of Thirupavai and Nachiar Tirumozhi that are still recited by devotees during the Winter festival season of Margazhi. Andal is known for her immeasurable devotion to Lord Vishnu. Adopted by her father, the Alvar saint Periyalvar who found her as a baby, Kodhai was brought up in an atmosphere of love and devotion. As Kodhai grew into a beautiful woman, her love for the Lord Vishnu grew strong , her resolve strengthened and she thought constantly about marrying Ranganathar of Srirangam.

During the month of Margazhi (close to December), she takes her friends to the temple early in the morning, singing Thiruppavai. She prepares the garland for the Lord and wears it on her own shoulders to see if it will suit the Lord. This is not normally practised by Hindus and infact is considered to be a sin. Andaal is unaware of this, she just ensures that the garland is best fit for the Lord, who she loves so fiercely. One day, her father notices this, and becomes very furious and upset. That night in his dreams, Lord himself appears and convinces him that he is more happier to wear the garland that is worn and given by Andaal. And thus she is fondly called as ‘Soodi kodutha sudar kodi’ meaning, the beautiful one who wore the garland and gave’. As promised, the Lord did marry Andal and took her with him. Even today, Garland worn by Andal is sent to Tirupathi a day before the Brahmostovam and also to Madurai Kalazhagar, a day before the Chithrai festival. 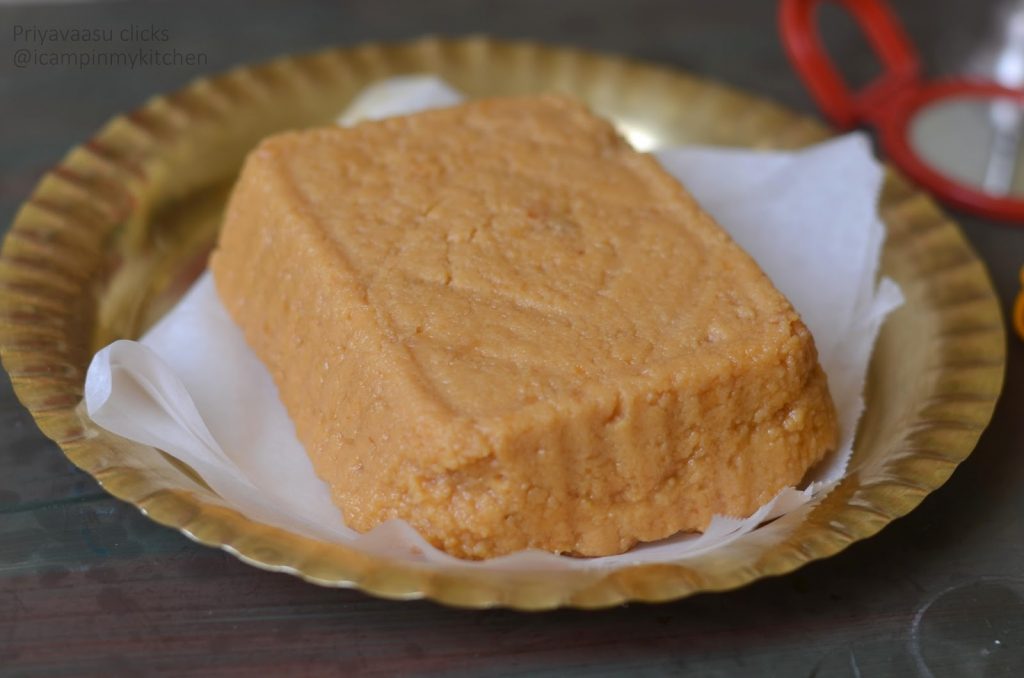 Srivilliputur temple gopuram was built by Perialwar himself, with aids from Pandya King. Another significance about this Temple’s Gopuram  is, it is also in the Official Seal of Tamilnadu. Yes, if you are wondering why a vaishnaivite temple is the official seal of a State??? Because, the Rajagopuram  one of many tallest temple tower in the state, at 60 m (192 feet)high, has thirteen progressively smaller tiers.  None of the tiers has any statues or painting depicting any religion. It signifies the ancient Tamil architecture, symbolizes the age old matured culture and stands majestically as a proud tradition. Thus it is the official seal of Tamilnadu along with Asoka Chakra and the words Truth alone Triumphs. So, today’s prasadam recipe is the famous Thiratipaal/Paalkova of Srivilliputhur. I was actually preparing some other recipe today, but a call from my Mom, changed the post. I told her about the theme this week and also said that wrote about my favorite kalkandu panagam of narasimha swamy. She immediately asked me, did i watch The Kumbhabishekam of Shri Andal & Ranga Mannar Swamy Temple, srivilliputhur,which happened 3 or 4 days before. As usual, I said, no, then she gave me all these info about the paalkova and the seal. Moral : Never underestimate Mom’s, they are Knowledge Banks and they keep serving us with interest, when and where-ever needed!!! 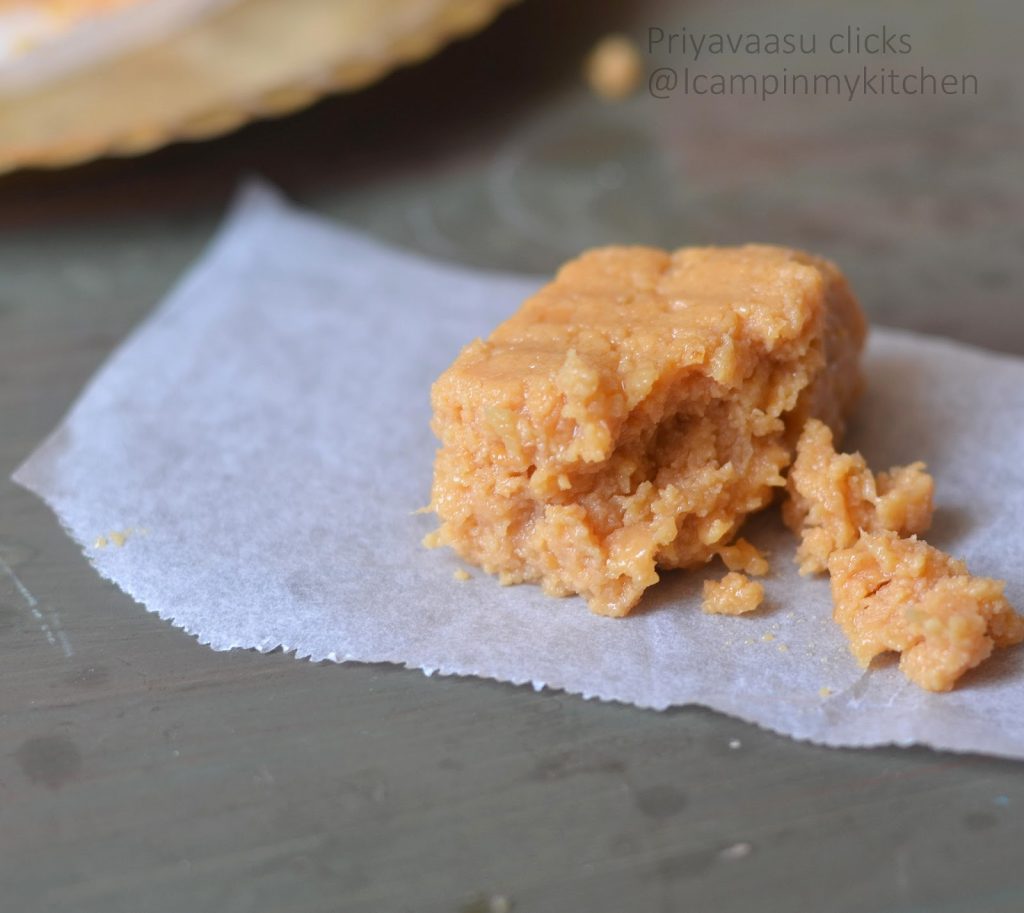 With such a history, it definitely should be in today’s post right. So looking for a perfet paalkova/thiratipaal, i wandered the streets of Google!! He/She pointed me to an article from The Hindu, i was way too happy, as it had the recipe too. The only change i made to the recipe is to reduce the sugar to ¾ cup. It is way too simple recipe, but one, that demands a lot of attention. Only one Rule : Keep Flame Low and Stir Often! 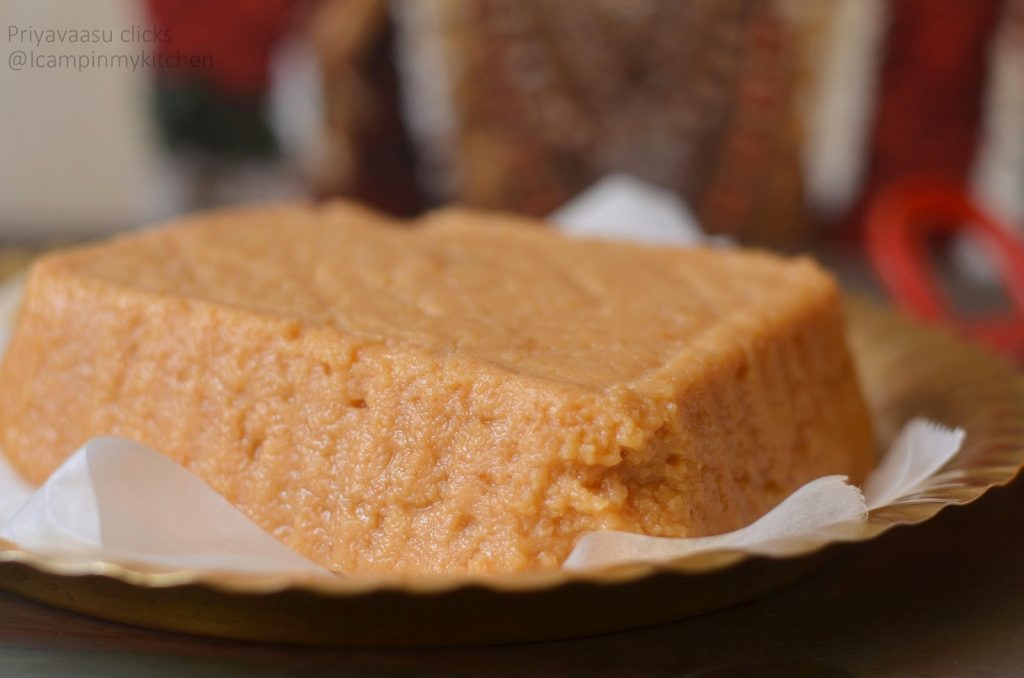 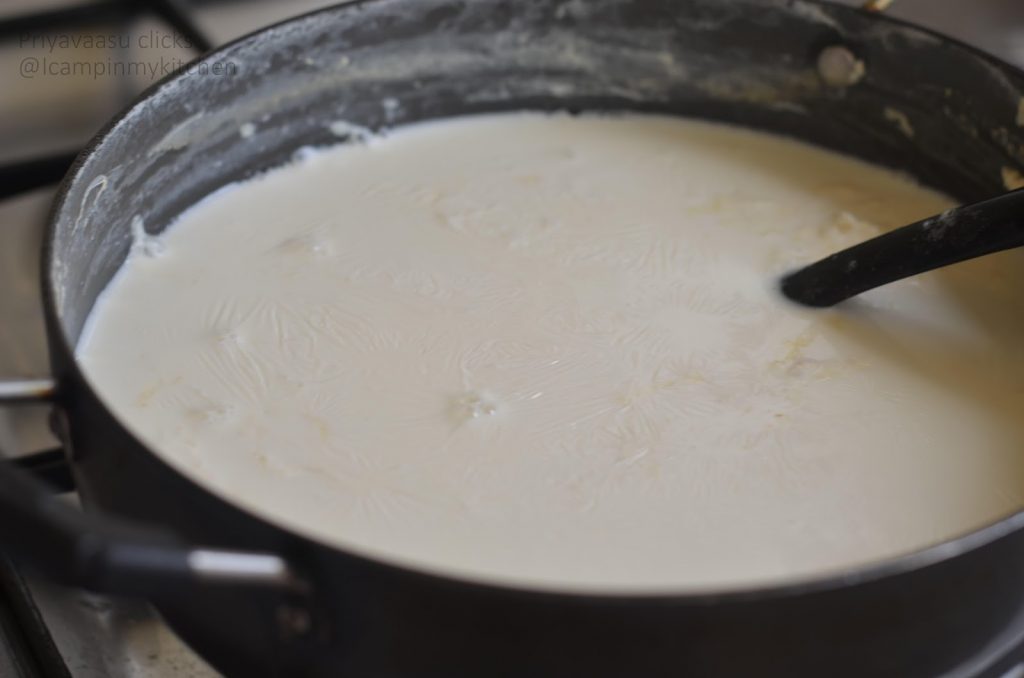 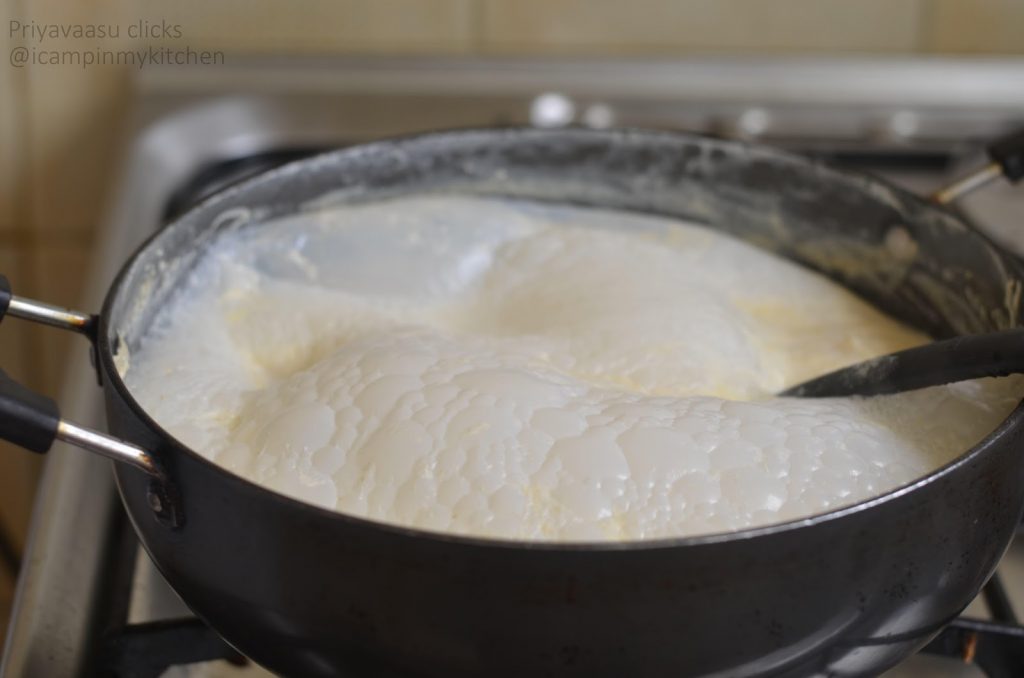 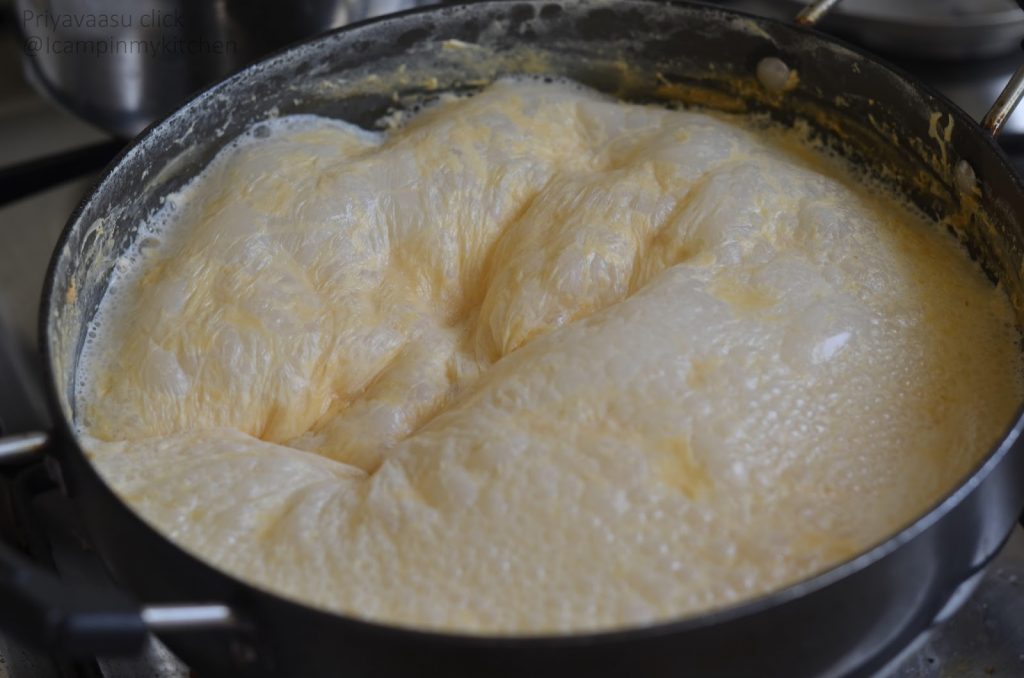 Sing like Dory of Finding Nemo, you won’t get bored! 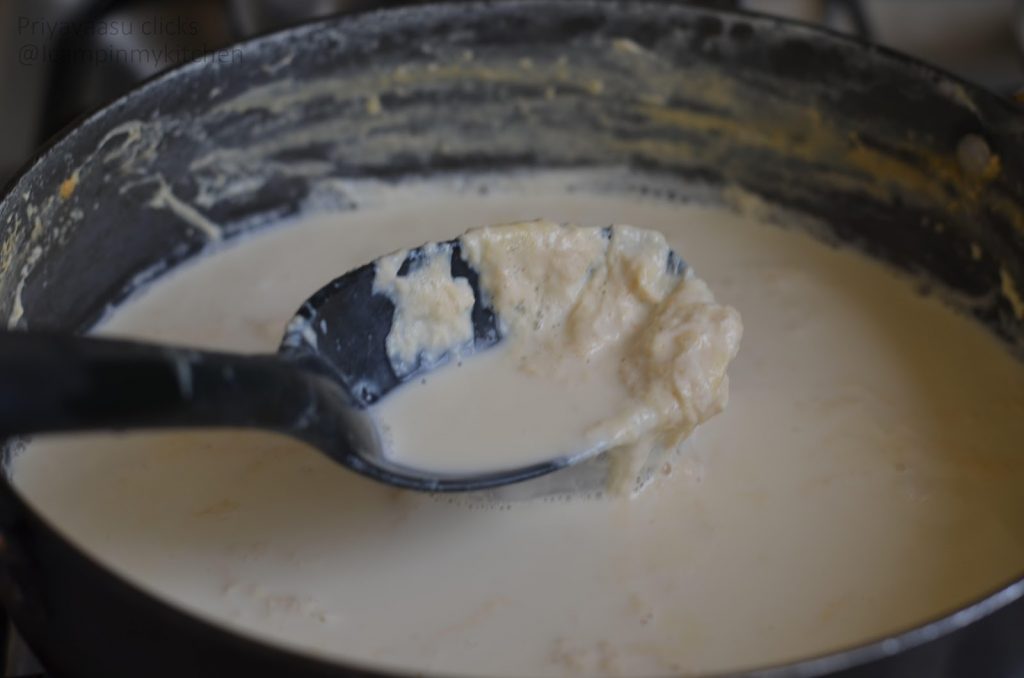 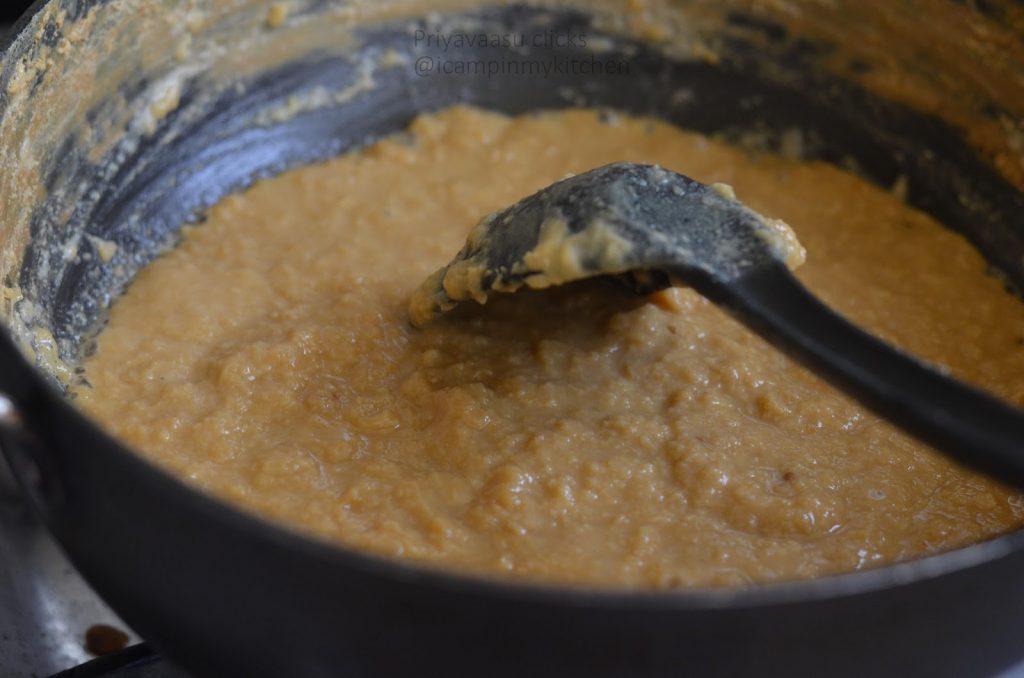 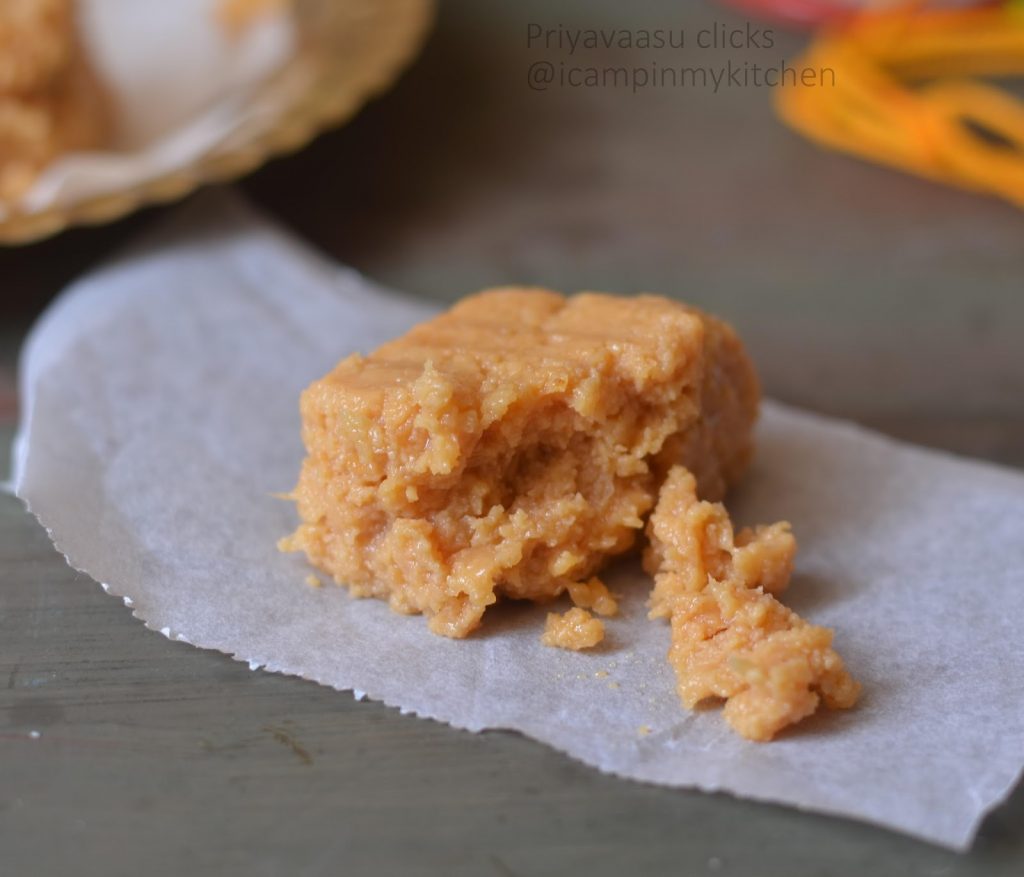 Check out the Blogging Marathon page for what others are cooking!!