Karadayan nombhu adai, sweet and savory dumplings made of rice flour. A traditional recipe made during Kamakshi nombhu or savithri vratham.

Karadayan Nombhu, a Vrath/Pooja done on the day when the Tamil month Maasi, transitions to Panguni, usually falls on March 14, every year. It is also known as Savithri Vratham.

A festival celebrated by married women, who pray for the well being of their husbands while the unmarried girls pray to get an ideal life partner. It is similar to Karva Chauth celebrated in North India. On this day, women tie a sacred yellow thread (saradu/charadu) around their neck after worshipping the deity.

It is believed that Savithri did this pooja and won back her husband’s life from Yamdharma, the Hindu Lord of Death & Justice. Legend says, when savithri was following yamdharma, the  transition of the month began and she made this pooja in the middle of jungle with nothing but wet sand. So, at the end, what matter most is your belief.

The Poojai on Karadayan nombhu day is offered to Goddess Kamakshi. There is a beautiful temple in the Temple City of Kanchipuram for the Goddess. The neivedhiyam offered is a simple rice flour dumpling, called karadayan nombhu adai. Some have the tradition of making just sweet adai/dumpling. Whereas many make both sweet and savory dumpling.

The above mantra is chanted by married women while tying the sacred yellow thread in the neck. It means, Oh lord I offer you butter, that doesn’t melt and this adai/dumpling, do accept it and bless me, so me and my husband would never separate from each other, not even death do us apart!

To do the pooja, you can chant the 108 names of Kamakshi and do archanai with kumkum/vermillion or with flowers. Find the Kamakshi Stothram in tamil here, English slokas here. Youtube link here for the slokas here.

Please check recipe card below for exact measurements of each ingredient used and also for the detailed instructions.

For the Sweet Adai

For the Savory Adai 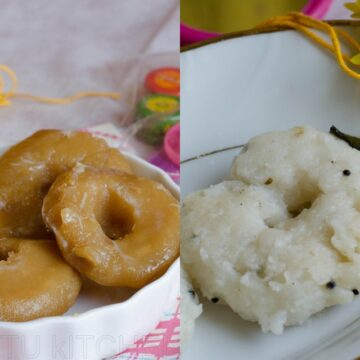 For the Sweet adai/Vellam adai

If you have leftover savory dough then you can shape them into ammini kozhukattai’s, with the tempering and spices added, these cute dumplings would taste even more tastier.