Maavilaku, a traditional rice flour lamp offered during Aadi(july – August), Thai(Jan-Feb) and Purattasi(Sep-October) Months of the Tamil Calendar. A traditional south-indian ritual, made with rice flour, jaggery and ghee.

When do we do Maavilaku?

Traditionally rice is mixed in milk, left to hydrate for an hour or two, drained for sometime and then ground using traditional grinding stone “Eyanthiram/Ghatti”.

This process is done the previous day morning, after taking bath and before having any food.

Next day it is sweetened with honey, jaggery and coconut shavings. The prepared rice flour is spread wide on a brass plate or a pooja plate.

Two rice flour lamps are made with the same flour by adding extra milk. The flour lamp is laid with cotton wick, ghee is added and the lamp is lit during the poojai.

The Measurement of Rice is more important while doing Maavilaku.

Step by Step Instructions on how to do Maavilaku

If you have tried this recipe and like it, give it a 🌟 rating or let me know in the comments below.  You could also share it with me on Instagram using

How to Prepare Maavilaku Maavu 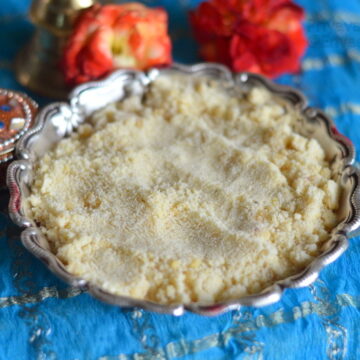 What Slokas to Chant While doing maavilaku pooja

What to do with the Maavilaku Maavu?

We normally wait for the rice flour lamps to go off on their own. Once this happens, it is removed from the altar and everything is mixed well. We can add some freshly grated coconut shavings to this while mixing.

The maavilaku maavu after the poojai can be distributed to everyone. Amma usually packs it in small ziploc pouches and shares with all her friends in the colony.

She also invites few of her lady friends to the house, gives thamboolam to them along with the maavilaku prasadam.