Barley buttermilk, a refreshing and cooling summer drink, made with barley, buttermilk and jazzed up with simple spices.

Barley porridge, most women would have tasted this during pregnancy. Barley is a natural diuretic.  When there is water retention and swelling of feet, first thing in the morning would be this porridge,  it used to taste very bland and oh my and mom used to push it down my throat.

The same porridge I make now for myself,  a bit different with spices and it tastes yum. This recipe is inspired from Sangeeta’s Health food desi videshi blog. Whenever I need a light meal, I go for this porridge.  I make about 3 or 4 glasses of this and keep having it till midmorning.  Only inconvenience is going to the loo often, but very effective. 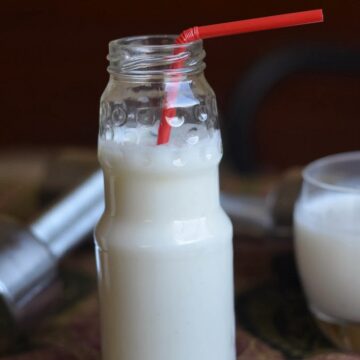 Enjoy this refreshing thin porridge of barley or barley buttermilk. An apt drink for the hot summer. It doubles up as a light meal and also hydrates your system well.

7 different Lassi/buttermilk to try this summer
With mercury rising in many part of the world, many of us reach out for chilled drinks during mid-mornings, or even during lunch. My favorite drink is lassi, it is easy to whip up and i make it different everyday. Here is a list of 7 different lassi’s from my kitchen, which i make often, you can try one every day and not get bored of this delicious drink.
Check out this recipe