Naan-e-Barbari, Persian/Iranian Traditional Bread. An oval shaped, bread with a crisp outer and a light and airy texture, also known as Tabrizi Bread or Nan-e Tabrizi.

My search for a Naan bread, lead me to this Persian/Iranian Traditional Bread. Naan-e-barbari, bread baked by barbars. an ethnic group of people who lived in Iran. Though  the name Barbari has been abandoned and no longer applies to the ethnic group, however, the bread is still referred to as Naan-e Barbari. While Hazaras refer to it as Naan-e Tandoori (bread made in the Tandoor oven).

What got my eye in this bread is the use of roomal/baking soda glaze – mixture of flour, water & soda for that beautiful golden color and texture on top.

Don’t you agree? The magic of plain flour, water and salt with addition of yeast and lots of love from your hands, turn into something crusty, soft and fluffy. I love watching bread in the oven. Don’t think i m creepy, you can ask many regular bakers, we just love how with constant heat, the bread slowly raises and forms a beautiful crust.

Try it to believe it. If you are a beginner to bread baking, I would recommend try this German potato bread Kartoffelbrot made with just flour, potato and yeast. Every begginer should definitely try this quick and easy bread. Yet another easy bread Faluche du nord, a traditional bread from northern France.

Once you catch the baking bug, then there is no stopping. These no knead pizza rolls are my family and many of my friends favorite. There is whole world of no knead breads out there like these Cheddar garlic rolls. I think i have given you enough crazy baking bug with this list.

Step by Step instructions to Naan-e-barbari 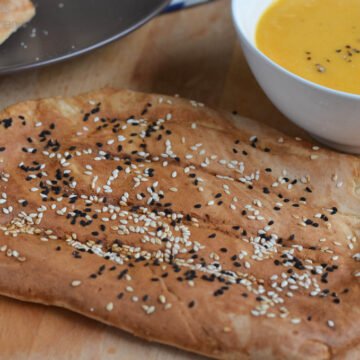 Let us make the flat-bread

Enjoy this crispy, light and airy bread for your breakfast with a variety of dips or as a dinner with a warm bowl of soup.

I served this bread along with some potato & carrot soup for dinner today. Such a filling meal it was. It might even taste better with some tahini/hummus too